With the new Teatro collection, Non Sans Raison is interested in world of theater through the medium of the plate as a scene and so reminds its points in common with the culinary arts. When the act of eating becomes a spectacle, there would be one step from the scene to the plate.

As in the theater, for eating, all you need is a place, a time, an act and a public. The cook like the art director, has a public. Thus, the plate is a place of representation, as a theater, a place where you look. The act of eating a dish like watching a show are social rituals. The kitchen like the theater, is an art of metamorphosis and illusion. A once popular, intimate and universal, it is a space of sharing, a means of transmitting good manners and know-how. A full-fledged culture and a way of life for sure.

Its refined and intense design, composed of black varying sizes stripes and black flat tints, reminds both the toing and froing on stage and behind the scenes and the emulation that causes this moment of culinary discovery. In the center, the scene represented by the white porcelain contrasting with black, intensifies the enhancement of food. Ornamented with a gold filet, the Teatro plates are ready to welcome the singular gustatory landscapes that you may invite to taste.

Limoges porcelain – Extra white kaolin – Made in France
Pattern : silkscreen black and gold filet
Ideal and resistant for a daily use : oven and dishwasher. 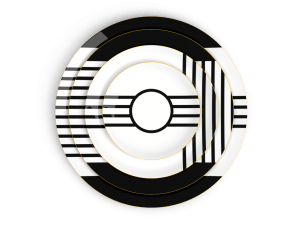 Non Sans Raison,
The Limoges porcelain
100 % Made in France.